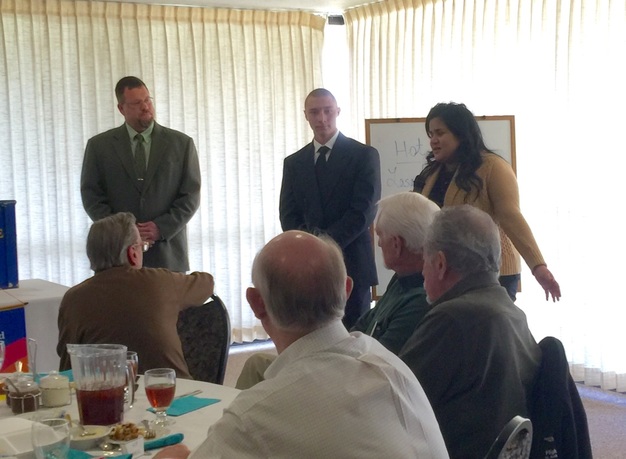 Mr. Summers' vocational language arts students, William Terral and Kathy Cardenas-Lopez, present their experiences to the Cañon City Rotary Club.
We are excited to see that Cañon City Police Department is establishing a summer mentoring program to support and guide seven of our at-risk youth aged 10-16 with police officer role models.  This is wonderful, as we all know the value that lies in young men and women having positive role models in their lives, whoever they may be.

We are pleased to announce the Association of School Business Officials International recently honored Cañon City School District director of finance Buddy Lambrecht for earning Certified Administrator of School Finance and Operations status.  This certification is only granted to highly qualified individuals who fulfill multiple requirements, including proving eligibility through work experience and education, passing a comprehensive exam that tests competency in accounting and school business management, and adhering to the ASBO International Code of Conduct.  Congratulations, Buddy, for this wonderful achievement! 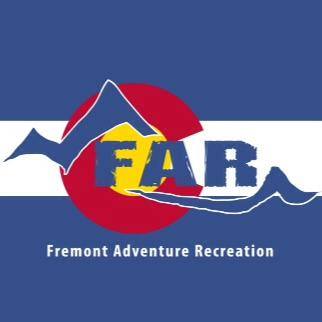 I also offer a big thank you to Cañon City High School teacher Bill Summers for presenting the philosophy behind his vocational language arts program to the Cañon City Rotary Club last Wednesday.  Mr. Summers brought several of his students who shared the experience they had in this course.  They explained how the course helped them understand how reading and writing skills are used in the world of work, and how the course prepared them to interview for jobs in fields they chose.  I am not sure I have ever witnessed such coursework presented in a more relevant way to students, and want to add how much I appreciate how Mr. Summers has engaged community business leaders in making this class an excellent experience for his students.

Finally, I thank Fremont Adventure Recreation for the great work they have done publishing an Adventure Guide for the Royal Gorge Region highlighting outstanding outdoor recreation activities throughout Fremont County. What is even more exciting is FAR wants to put a copy of this guide in the hands of every 6th grade student in the RE-1, RE-2, and RE-3 school districts!  We hear the BLM has paid for a large run of the publication, Fremont Regional Wellness will kick in a water bottle for all the students, and FAR is contributing the intellectual property of the guide itself.  In fact, FAR has created a slightly modified student version appropriate for the kids.  What a wonderful project FAR has produced all members of the community!

We'll continue to accept applications for Cañon City High School principal through the end of this week, and are setting up an application screening and interview process related to it.  The board and I are also beginning to discuss long term facilities use issues geared toward applying for a comprehensive facilities improvement grant next February.  As we move forward with this process I will share information about our discussions

The Cañon City Education Association and representatives of the district have been negotiating and updating master agreement language from 4 to 7 pm each Wednesday since March 4th. Last week we agreed on language aimed at revising evaluation timelines to support use of year-end benchmark student achievement data in teacher evaluations and on language related to how measures of learning will actually be applied to evaluations.  We also agreed on language allowing schools flexibility to choose trimester or quarterly grading systems at the grade K-5 level, and ensuring that four flex work days remain in the agreement no matter which system is used by schools.   The process has been mutually cooperative, and all parties participating have taken responsibility to feed negotiators on a weekly basis, with Cañon Exploratory School providing treats from Chicago Bob’s at this most recent session. 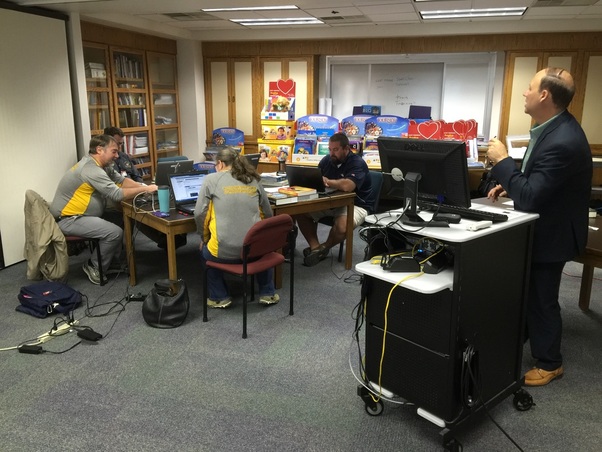 Director of student services Dominic Carochi guides high school science teachers in curriculum alignment and refinement work.
On Monday I traveled to the San Luis Valley to observe a vocational video productions program that we may want to replicate in Cañon City High School.  On Tuesday I had a Superintendent’s Advisory Council meeting and several face to face building staffing level discussions with principals.  I also touched base with leaders of the Cañon City Education Association, then attended a Cañon 2020 task force meeting.  On Wednesday I observed our high school science team working on aligning their curriculum to current state standards, and we resumed spring master agreement negotiations, and on Thursday I met with DHS director Steve Clifton and RE-2 superintendent Rhonda Roberts, then had a series of routine meetings and attended the annual CASA fundraiser luncheon.  On Friday I met with board director Shad Johnson over breakfast, took a potential CCHS principal candidate on a tour of the community during mid-morning, met with board vice- president Lloyd Harwood over lunch, and met with director of finance Buddy Lambrecht about software that might help us better analyze the expenses of the school district in the future. 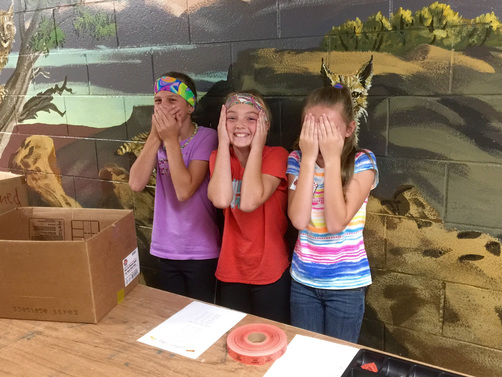 McKinley students welcome visitors to the Wildcat Grill!
On Monday morning I have a series of parent and staff members meetings.  During the afternoon I will participate in a Colorado Health Foundation site visit related to a grant application we submitted.  In the evening we’ll have a board work session and regular board meeting.  On Tuesday I have Superintendent Advisory Council and leadership team meetings, and I’ll poke in to observe part of a digital citizenship presentation by a district level committee of parents at Mckinley Elementary before heading over to Harrison K-8 School to see Priscilla’s National Junior Honor Society induction ceremony.  On Wednesday morning I will attend the Southern Superintendent’s meeting in Pueblo, but run back to Cañon in time to present a program on school finance at the Rotary meeting.  In the afternoon I will tour and discuss the future of the welding program at CCHS, then I will attend a technology committee meeting at Lincoln School of Science and Technology, and then master agreement negotiations back in the board room from 4 to 7 PM.  On Thursday I have CCEOE scholarship interviews, hope to attend the McKinley Wildcat Grill for lunch, and wrap up my day judging chili recipes at the Mountain View Core Knowledge School.  I plan to work in my office on Friday morning, attend a Snap-On-Tools presentation at the CCHS Vocational Automotive shop, and I’ll end my day at the Pueblo Community College Hall of Fame Dinner were board president Larry Oddo will be inducted. 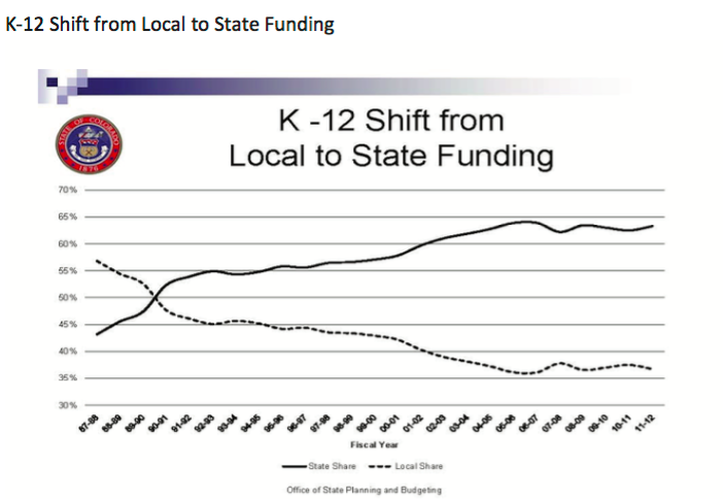 This chart shows the shift from local property taxes to state revenues providing the lion's share of funding for Colorado school districts.
For the past several weeks I have shared information about funding difficulties K-12 school districts all over Colorado have experienced, and how this affects us in Cañon City School District.  A seemingly simple answer to the problem would be to ask our governor and state legislature to allocate more dollars to education.  However state constitutional constraints, caused by passage of competing tax-restricting amendments, have created an environment where our state leaders are powerless to generate revenues to fuel key state funded programs.

Let’s continue with TABOR.  The Taxpayer Bill of Rights was passed by Colorado voters in 1992. It prohibits enactment of any tax increase without a direct vote of the people. Additionally, TABOR places strict limits on how much revenue the state can keep and how much it can spend. Colorado’s TABOR limits established the strictest revenue and spending restrictions in the nation.  As a result, any revenue collected in excess of TABOR’s formulaic limits must be refunded to taxpayers.

As I explained in previous weeks, through implementation of the school finance act, Colorado’s schools are funded from a combination of local property taxes, state income tax, and fee revenues. The formula established by Gallagher limits local revenues by ratcheting down the residential assessment rate. Despite this, from 1982 through 1992 school districts were still able to make up for lower property tax rate assessments by adjusting their mill rates. In addition, during this time the state legislature also had flexibility to increase state spending to make up for losses in local property tax contributions. However, with the passage of TABOR in 1992 a combination of complex revenue restrictions made it increasingly difficult to fund our schools adequately. TABOR’s revenue limits automatically reduced mill rates in school districts across Colorado, and at the same time limited the legislature’s ability to support school funding with additional state dollars. The result?  Total per pupil funding in Colorado was unable to keep up with the Consumer Price Inflation Index during the 1990s despite the fact that Colorado’s economy was in a boom. In the end, the combination of both Gallagher and TABOR amendments has shifted the burden of school funding from being paid for mostly by local property taxes to being covered by the State General Fund.  As a result, though local property tax revenues covered 58% of total education costs back in 1987-88, they now only cover about 37% of these costs. It is my opinion this conundrum has also shifted decision making power about school districts from local communities to the state house and governor’s office.

Add to this constitutional salad the passage of Amendment 23 by Colorado voters in 2000, which required the state legislature to annually increase K-12 per pupil funding by the rate of inflation plus one percent through 2011, and then simply by the rate of inflation thereafter.  It’s intent was to also increase funding for specific categorical programs, such as special education and transportation by the same percentage. Amendment 23 was designed to restore funding cuts that were experienced by public schools in the 1990s. It even allows K-12 spending beyond these minimum requirements at the discretion of the legislature.  As can be deduced, from its inception Amendment 23 came into conflict with the Gallagher and TABOR amendments as two of them worked to severely limit the increase of tax revenues and the other guaranteed funding increases to a specific portion of the annual state budget.  With the arrival of the Great Recession in 2008, and the extreme reduction in tax revenues the state of Colorado experienced, the legislature was faced with making a decision as to which of these constitutional provisions to abide by.  Their choice?  TABOR and Gallagher were to be followed, and Amendment 23 was to be reinterpreted to include the establishment of the negative factor I have written about during the past several weeks.  This is why  Cañon City School District must operate on 3.5 million dollars less than if Amendment 23 were still in effect as intended by voters.

Next week I’ll discuss the recent attempts that have been made in Colorado to solve this education funding dilemma.