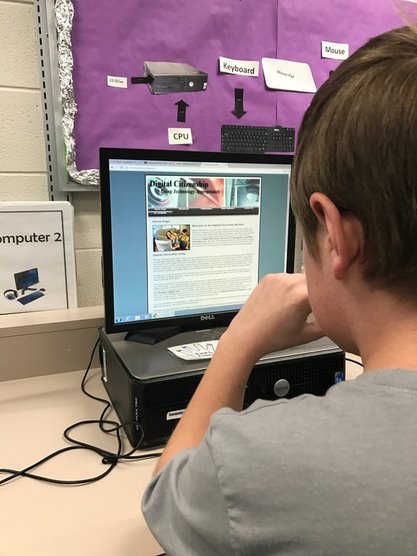 A CES students works on a Digital Citizenship module.
While on a building evaluation visit Thursday at Cañon Exploratory School I had the pleasure of visiting Lisa Bryan’s technology instruction classroom to see students working on 21st Century Skills related to digital citizenship.  My understanding is that our K-5 technology teachers throughout the district are doing wonderful work offering such opportunities to our children.

Exciting things continue to happen at Lincoln School of Science and Technology.  Lincoln’s staff recently began using Google Hangouts to broadcast student created weekly announcements into each class.  In only a few short weeks this has become quite a popular activity for  the children.  Lincoln’s staff continually does more with less when it comes to offering students rich technology based learning activities.

Another highlight of my week was the opportunity I had to walk through the amazing Life Skills program courses being offered at Cañon City Middle School.  While on site for our mid-year review I was simply amazed at the level of student engagement taking place in Cortney Richardson’s choir class, Shannon Daly’s building trades class, and Tanna Miles’ computer coding class. 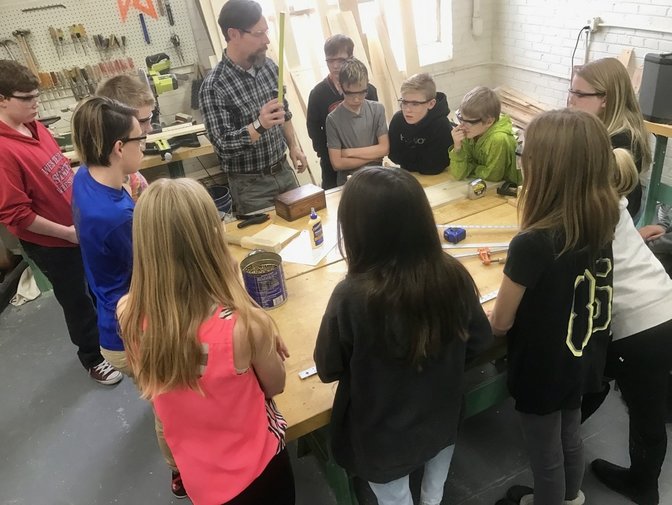 CCMS teacher Shanon Daly shows students how to properly measure wood to make a box.
The major focus of our work has been conducting school visits for the purpose of quantifying leadership performance and instructional improvement.  Two weeks ago we visited McKinley and Washington elementary schools with independent consultant Wendy Birhanzel.  This week we spent a significant amount of time at Cañon City High School, Cañon City Middle School, and Harrison K-8 with independent consultant Ted Knight.  We also visited Cañon Exploratory School with former Madison leader Molly Merry.    This is extremely important work, and I’ll be sure to share information about what we observed at each school site in the coming weeks.

On Wednesday I traveled to Denver with four of our school board members to participate in a regional day of advocacy at the capital.  While there we had the opportunity to check in with representative Jim Wilson, observe a legislative hearing, connect with Colorado Rural School Alliance leadership, and drop in at the CDE Capital Construction office where the BEST program is housed.

At our board work session last Monday I received my annual evaluation feedback and was thrilled to receive a contract extension through the end of June 2019.  I was pleased with the actionable feedback I was given by the board, as this will guide my work in the coming year.  I also want to thank all our employees and community members who took the time to complete the survey that helped to guide the board’s work toward this effort.

Last week we conducted mid-year evaluation visits at Cañon City High School, Cañon City Middle School, Harrison School, and Cañon Exploratory School.  I also attended a meeting with community members who are interested in supporting a possible bond question to provide our required match for any BEST grants we might receive.  I also attended the CASB regional legislative engagement day with some board members on Wednesday.  On Friday I had a series of meetings at my office, and on Saturday I attended the local Legislative Hour to hear about what is going on at the capitol from Senator Kevin Grantham and Representative Jim Wilson. 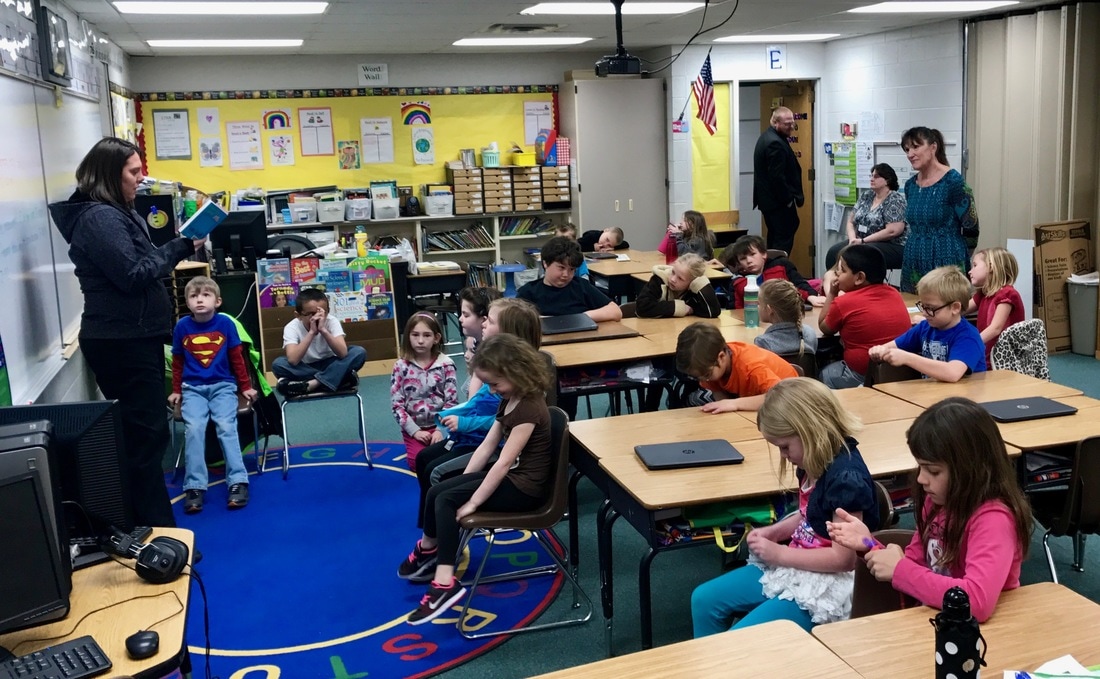 Molly Merry helped the district evaluate the instructional performance of Cañon Exploratory School.
On Monday afternoon I'll be meeting with our instructional leader PLC, and then I'll conduct a calendar committee meeting.  On Tuesday morning I plan to attend a high school BLT meeting.  Then I'll be on Morning Line, will conduct a SAC meeting, and conduct a variety of one-on-one meetings throughout the rest of the day.  On Wednesday morning I have my monthly breakfast meeting with Classified Association members.  I’ll also attend various delayed start staff development activities.  I'll then attend a Technology Visioning Committee meeting and a CCHS parent advisory committee meeting at the end of the day.  On Thursday we have a CDE EARSS grant site visit, a meeting about the future of our online program, and a Cañon 2020 committee meeting.  I'll also be attending 2 of the 4 school PTO meetings that take place that evening, before heading to Harrison to attend my daughter Priscilla's choir concert.  On Friday I plan to attend a regional superintendent meeting and the Dinner and Jazz fundraising meeting at CCHS. 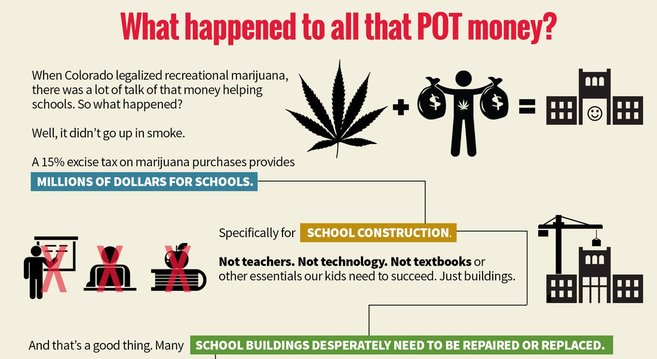 A graphic showing where marijuana tax dollars go in Colorado.
I have been doing my best to discuss major education funding issues in Colorado with readers.  Since January I have so far covered how schools are funded, where Colorado ranks nationally in school funding, the affects of inadequate funding on the Cañon City School District, and the constitutional tug-of-war that has caused limited state revenues leading to difficulties when it comes to funding K-12 education programs.

Since per pupil eduction funding in Colorado dipped below the national average, many attempts have been made to address the problem.  However, our education funding problems had already been identified back in 1982 when the Lujan case challenged funding inequities, based on local property wealth, hit the Colorado Supreme Court.  Unfortunately, and as a harbinger to many future education funding court cases, Colorado’s high court sided with the state by declaring the plaintiffs did not even possess the right to sue the state over the matter.
​
The next school funding target was funding for school construction. In 1998 the Giardino lawsuit was filed in an attempt to support school districts with sparse property wealth to raise funds for the purpose of constructing new buildings or repairing old ones.  After several days in court the state, seeing a losing situation, requested to settle the matter.  The settlement pumped almost 200 million dollars into a statewide capital construction fund.  However, legislators soon recognized this dollar amount was not offer an effective long-term solution.  Thus, by 2008 Colorado’s legislature developed a program called Building Excellent Schools Today.  BEST created a competitive grant process, funded by state land trust revenues (and now some marijuana tax proceeds), that has since paid for the construction of many new schools and the remodeling of countless others.  Cañon City has already benefited from the BEST grant process by tapping funds to upgrade safety alarms repair aging roofs.  This year we are applying for nearly $38 million in funding to help us build two new schools and perform health and safety upgrades on the rest. 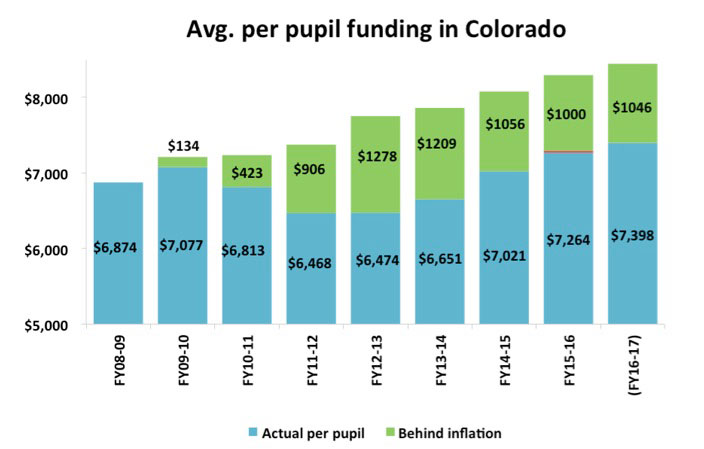 The green section of this chart shows how much below the intent of Amendment 23 we fund children in Colorado's schools.
In 2005 a number of school districts and parents filed a lawsuit against the state of Colorado that came to be known as the Lobato lawsuit.  After trip through the Colorado Supreme Court simply to gain the right to be heard, an actual trial was held in August 2011.  At that time the presiding judge declared Colorado schools were being underfunded by nearly 4 billion dollars.  However, following a two year appeals process the high court overruled the trial judge’s decision on a 4-2 vote, maintaining the status quo when it comes to education funding.

Lobato v Colorado led to two more attempts to solve our K-12 funding problems.  In 2011 Proposition 103 was placed on the statewide ballot.  It  would have addressed some of the problems identified in the Lobato lawsuit.  However, it failed by a 65 to 35 percent margin.

After the Supreme Court overturned the Lobato trial verdict in May of 2013, Governor Hickenlooper and the state legislature created legislation aimed at making the school finance act more equitable.  1 billion dollars of additional funding would be needed to do this, and this was placed in front of voters in the form of Amendment 66.  66 lost by a 66-34 percent margin in November 2013, during the same election Cañon City School District bond and mill-levy questions also lost by small margins.

Along the way Colorado voters legalized recreational use of marijuana on a promise to “fund education” though tax dollars garnered.  Where do those dollars actually go and how many are allocated?  The answer is that only around 40 million dollars of marijuana tax revenues are passed on to schools each year, and most go to the BEST competitive grant process.  Another way to look at this is one year’s worth of Colorado marijuana tax dollars is barely enough to fund our proposed BEST project in Cañon City.  With Judge Rapport, back in 2011, declaring that Colorado underfunds its K-12 school system by 4 billion dollars per year, marijuana tax revenues have clearly not been the answer to our funding woes.

The summer of 2015 brought about one final opportunity for Colorado’s high court to do right by K-12 students.  The Dwyer lawsuit asked our Supreme Court to declare the establishment of the negative funding factor unconstitutional, a violation of the original voter intent of Amendment 23.  23, which passed after the Taxpayer Bill of Rights (TABOR) and Gallagher, was designed to increase base K-12 funding, as well as funding of various school finance factors, by the rate of inflation on an annual basis.  However, the creation of an additional finance factor during the Great Recession, this negative factor, added to our formula a way fro the state to actually reduce education funding by nearly 1 billion dollars per year.  A 4-3 Supreme Court vote once again left Colorado’s school finance system as it currently stands, woefully inadequate when it comes to providing the basic resources needed to educate our children.

Thanks for listening again.