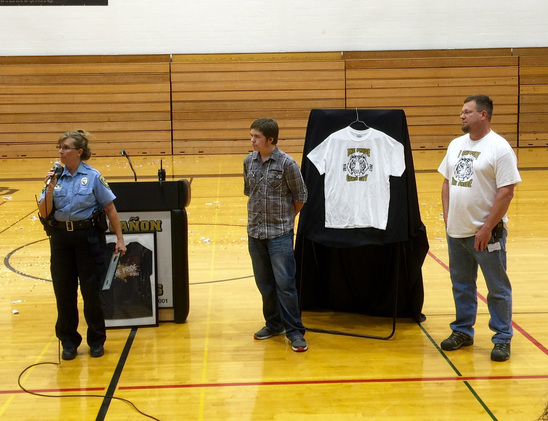 CCHS student Kaleb Smith was honored by the CCPD.
This week we highlight Cañon City High School student Kaleb Smith.  On Friday at the CCHS pep assembly Mr. Smith was honored by Cañon City Police Department for intervening in a dog attack this summer.  Kaleb and his brothers fought off two dogs and brought an elderly resident to safety, while most likely saving his pet.   Principal Bill Summers arranged for this presentation to be made in front of the entire student body to highlight Kaleb’s selflessness and quick thinking in the situation.  Congratulations on this recognition Kaleb, and thank you for representing Cañon City High School so well!

Speaking of high school pep assemblies, at the very same event, CCHS administration continued the tradition of clapping in a new senior class, allowing them to perform a skit in front of the student body, retiring the prior year’s Pride t-shirt, and unveiling the new one.  At this ceremony, Cañon City High School student body also made a $500 donation to the Orchard of Hope Foundation.  Orchard of Hope is an organization whose mission is to support families, financially and emotionally, in dealing with a diagnosis of cancer.  This donation came from proceeds raised through the sale of last year’s Pride t-shirts.

The CCHS Class of 2017 performs in front of the student body. 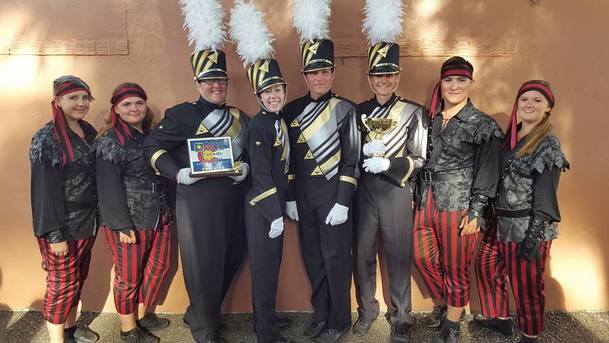 members of the Tiger Pride Band proudly display the hardware they took home from the State Fair Parade.
Speaking of Pride, I thank CCHS athletic director Scott Manchester and math teacher Kevin Marushack for all the work they put in to the Cañon City High School Pride organization.  The Pride is designed to give ALL CCHS students opportunities to become deeply involved in school, even those who don’t display serious artistic or athletic talent.  It is a model for all high schools trying to create an inclusive environment for students.

​Another point of pride is the fact that the CCHS Tiger Pride Band took first place in class 3A and 2nd place in overall sweeps at this year's Colorado State Fair parade competition.  In addition to this, they also looked incredible in the new uniforms that were purchased thanks to many community donations!

On a final note, at last Monday’s board of education meeting the board honored Cañon City High School counselor Tim Ritter for achieving his 200th victory as a varsity baseball coach last spring.  Mr. Ritter has been coaching for nearly 30 years, has won 4 league championships, qualified a team for the sweet 16 in 2016, and brought a team to the 4A final four in 2012. Mr. Ritter even spent time last summer as an assistant coach for the Liberal Bee Jays, who went on to compete in the National Baseball Congress World Series in Wichita, Kansas in July. 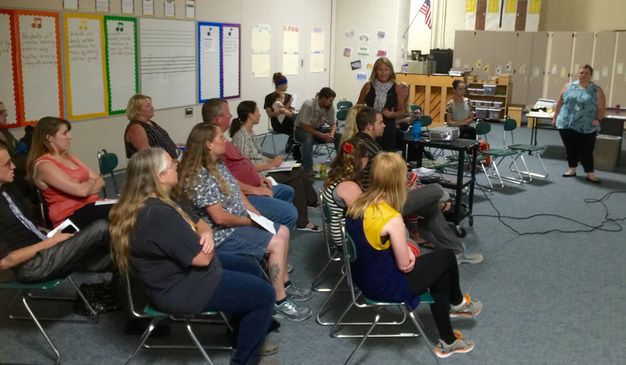 We continue to keep a close eye on pupil count in each building as we attempt to make sure each facility is properly staffed.  So far it looks like the high school has come in right around the 1070 students we budgeted for.  So far CCMS has 20 more students than we planned for, Harrison K-8 is up about 20, Lincoln has 20 more students than anticipated, McKinley is up around 10, CES is up around 20, and Washington is down around 50.  Because CES and Washington now have virtually the same number of students (not counting additional kids in Montessori kindergarten at the CES facility) we have decided to provide the same level of custodial support at each building.  Thus, we have posted an opening for a full-time custodian to be added to the CES staff.  We’ll pay for this through additional per pupil funding due to higher numbers, and by eliminating the student sweeper position that has been in place at CES.

Finally, we have also worked diligently to implement our early literacy grant.  Last week we had a first visit from our state assigned consultant. Schools have begun to use new reading materials, and to provide needed Lindamood-Bell interventions in small student groups.  Our literacy team has already begun weekly PLC meetings and is out and around the district supporting teachers in many ways.  One of our greatest hurdles at the moment is to figure out how to make best use of our new Journeys resources at Cañon Exploratory School in light of their multi-grade level instructional model.  However, I have met with district and school level administrators to build a successful plan to tackle this problem. 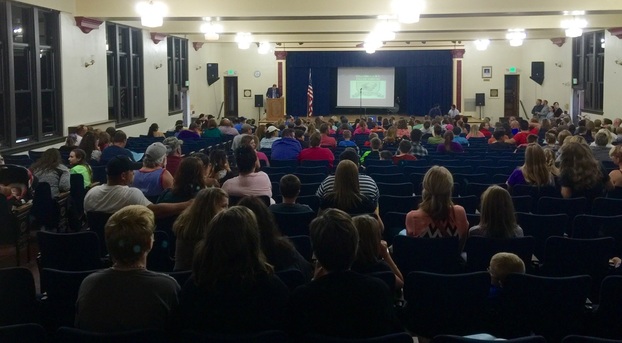 CCMS held its Back to School Night last Tuesday.
Last Monday I had an early morning parent meeting, attended a literacy team PLC, and met with director of human resources Misty Manchester and director of student support services Paula Buser about potential revisions to our admin salary schedule for the future.  In the afternoon I worked independently on preparations for a board of education work session, and then attended our board work session and regular meeting.  On Tuesday we had an early morning SAC meeting, and then I presented information about our district’s major improvement initiatives to the Cañon City Noon Lions Club. I also visited Cañon Exploratory School’s Culture Night and Cañon City Middle School's back to school open house event.  On Wednesday I met with district literacy coordinator Gina Gallegos to discuss the how we will evaluate our new literacy coaches. Then I had a meeting with our partners from SolVista Health, and I conducted afternoon office hours at CCHS in the commons area.  On Thursday I participated in a state level education visioning meeting, and on Friday I began my day meeting with director of instruction Adam Hartman to finalize his work goals for this school year.  I also conducted office hours at Cañon Exploratory School in their Library, attended a CCHS pep assembly, and met with Harrison and CCMS administrators about better defining middle school sports program participation processes. 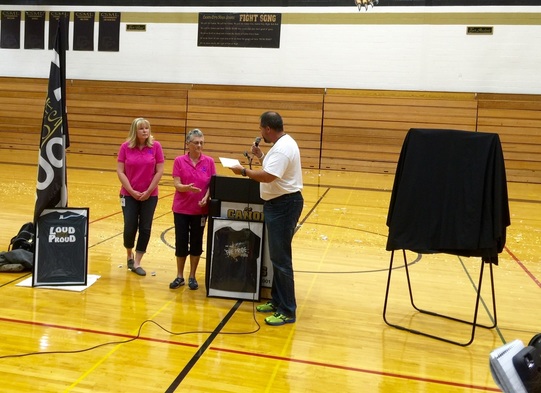 CCHS athletic director Scott Manchester presents a check for $500 to representatives from Orchard of Hope.
On Monday morning I’ll attend a meeting about a high school student at 7 AM, conduct in school office hours at Lincoln School of Science and Technology, meet with board president Larry Oddo over lunch, and then attend a CES leadership team meeting in the afternoon.  On Tuesday I’ll travel to the Colorado Department of Education in Denver with CES principal Scott Morton, director of instruction Adam Hartman and district literacy coordinator Gina Gallegos to discuss how we may best implement our new Journeys reading resources at CES in light of their exploratory and multi-grade instruction models.  On Wednesday morning I’ll conduct office hours at CCMS, meet with an interested community member about our health education efforts, and then conduct office hours at Harrison K-8.  On Thursday I'll meet with RE-2 superintendent Rhonda Roberts and attend an Evaluation Council meeting aimed at aligning our evaluation processes to what we agreed to in spring contract negotiations with CCEA.  My Friday schedule is still pretty wide open for the time being.